So far, OlliOlli World has been my game of the year in 2022. The insanely precise and smooth skateboarding mechanics and customization, along with the massive amount of different challenges, has kept me playing fairly consistently since its release in February of this year. Given all of this, it’s probably pretty obvious that my hype for the first DLC, Void Riders, has gone through the roof.

The premise of OlliOlli World: Void Riders fits well with the rest of the game’s wacky world, as aliens have landed and want to see your sick moves. With these new steel aliens come 18 new levels and over 50 new challenges.

These levels and challenges are spread across Cloverbrook, Sunshine Valley and Burntrock, with each area receiving three new levels. Beating 2/3 of them will unlock a boss level, each time you just have to either face the boss or complete the level or objective in a given time.

These boss levels used a lot of the same core mechanics as the regular game, but boy were they a lot of fun. I especially liked the Flappy Bird-like level where you have to catch piñatas in a given time.

The reason these bosses and all the new levels in OlliOlli World: Void Riders are so much fun is because the gameplay isn’t just a copy and paste of the base game. In fact, it honestly feels like a whole new game.

Sure, you still have your same general moves, loops, grabs, spins and all that, but the terrain has changed significantly. Along with all-new course structures, OlliOlli World: Void Riders introduces some game-changing mechanics when it comes to traversal.

The first fun new feature is Tractor Beams. These purple portals act as gravity-defying elevators, as they use the momentum of your leaps to levitate you to higher parts of the map. The trick to activating them is that you have to hold down a handle the entire time to get pulled up.

While this may sound easy, it requires fairly precise timing, especially when you need to clear gaps and other obstacles while performing a hold. You can’t just grab and levitate up, nor can some of them just hold down a handle all the time.

As with any other movement in the OlliOlli world, each location that has a tractor beam requires its own measured approach. You must become accustomed to each unique timing in order to be successful.

Tractor Beams are even more fun when combined with the other key new features that make up OlliOlli World: Void Riders: UFOs, extradimensional pop-ins, and fakeouts.

At the start, UFOs are scattered throughout certain levels, using their tractor beam powers to lift rails and other environmental items that your skater must use or avoid in order to make it to the end of the level. Thanks to these helpful little unidentified flying objects, your skater can traverse areas that would otherwise be impossible.

Extradimensional pop-ins are very similar, in that the aliens use their magical powers to pull rails, ramps, and billboards out of thin air. Much like the Tractor Beams, every single instance that uses this mechanic requires you to react very quickly, even memorizing their locations while simultaneously pulling a handle and trying to anticipate the next part of the map.

The final zone boss of The VOID, Nebulord, who is unlocked after beating at least 15 previous Void levels, makes amazing use of all these new traversal features. Despite the fact that you stay in the same general circle and use half-pipes to get back to the start, the Nubuloid Palace boss level is amazingly complicated, as it uses tractor beams and extra-dimensional pop-ins to make for some hell of fun.

If I had one complaint about OlliOlli World: Void Riders, it’s that I just wish it was longer. Overall, it only takes about an hour or two to master the new storyline of the entire DLC. And yes, exploring the different paths and new challenges definitely adds some time and replayability to that, but not nearly enough, especially since I was enjoying myself so much.

Despite that, I really enjoyed my time at OlliOlli World: Void Riders. New features like Tractor Beams enrich the landscape so much that they somehow manage to improve on the perfect 2.5D skateboarding mechanics and momentum that the base game offers. Praise Nebulord – and Roll7 and Private Division – for this gnarly addition to an amazing game. 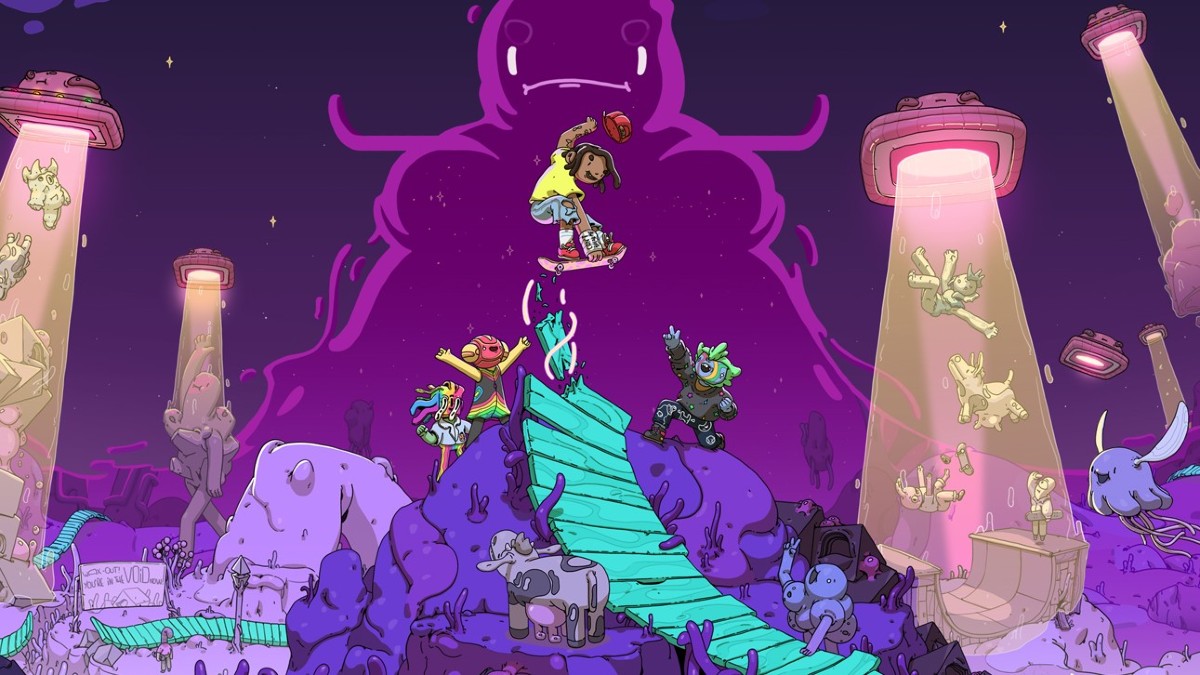