As the main airport of the capital of China and one of the most important in the world in terms of passenger traffic, this is the perfect base if you want to simulate scheduled flights in the country. It is also a good destination for VIP business jet flights and hosts some cargo flights offering a wide variety.

It can be bought is SimMarket for $24.32 plus sales tax, and it can be installed and updated through the store’s own client, which isn’t the best in its category, but it works.

For an in-depth look at the landscape, you can watch an ILS approach and landing on runway 36R in the first video below and a full flyover in different light and weather conditions in the second video.

Keep in mind that the planes you see in the videos are not part of the scenery (they come from some third-party AI solutions) as Beijing Airport doesn’t contain any static planes.

Incidentally, the airport works well with AI traffic, which is commendable given its size and complex layout of taxiways. The only minor issue is that – as far as I could see – the gates have not been assigned airline parking codes, so you see planes parked at the three terminals fairly randomly as they serve different groups of airlines in the real world.

While SIDs and STARs work correctly, there is an issue with the ILS approaches. The localizers appear to be off-set a few feet, prompting you to land on the lawn unless you manually correct your lane. This doesn’t appear to be solely the developer’s fault as this is an issue that I believe occurs at many airports in China when using standard Microsoft Flight Simulator navigation data. It can be corrected manually, but is often overlooked by third-party developers.

If you use Navigraph data, the problem goes away. The video above was taken on the Fenix ​​Airbus A320 using the latest Navigraph data and the localizer is correctly set to the runway centreline.

The PAPI lights are correctly calibrated for visual landings, and all ground services work without issue.

Taxiways and ramps are also appropriately marked according to the maps, so you’ll have no trouble navigating between the airport’s hundreds of gates and runways.

The orthophoto used as the base of the airport is adequate and has been terraformed to correctly represent the depth of access roads and transport rails. The only minor issue is the green texture used where the roads and railways cross the taxiways, which doesn’t match the orthophoto perfectly. However, it is very difficult to see from the flight deck.

The texturing of the runways is very well done, with great weathering, a high level of detail and a realistic representation of the different materials compared to the photographic sources I could find.

The markers are also accurately reproduced according to the charts and real-world sources, and presented with just the right balance of sharpness and realism, without looking too faded or cartoonish.

The modeling of the terminal buildings is really top notch, with fantastic attention to detail. The unique architecture and materials are perfectly reproduced through superb weathering and skillful use of physically based rendering.

The large expanses of glass that contribute to Terminal 3’s iconic look are of just the right opacity to appear realistic and each terminal is modeled with great care, including Terminals 1 and 2 which have not been overlooked although they are smaller and attract less attention.

The passenger boarding bridges are fully custom and beautifully modeled, including billboards and signage, and the level of detail on the aprons around the gates is very high.

All terminals have modeled interiors to explore, with Terminal 3 taking on the lion’s share of detail and looking truly spectacular, while the other two terminals still have reasonable interiors.

Away from the terminals, all the buildings in the land area including the towers and many hangars above the VIP terminal offer good models and textures with very few weak points.

The same level of detail is found in the landside areas, which are often neglected at airports of this size. This includes access roads, parking lots and even train tracks with animated trains.

The developer went above and beyond the call of duty by modeling many surrounding offices and residential buildings, and the entire area of ​​the airport is fenced (actually double fenced), which in itself is a rare treat in large hubs.

The default version of the airport in Microsoft Flight Simulator, like basically everything in China, is extremely poor, barely usable and basically unrecognizable, as you can see in the comparison images above. The difference in detail added by the WF Scenery Studio scenery is absolutely massive that you would expect a big performance hit.

This is not the case as the developer has actually done great optimization work. On my PC (RTX 3070, Ryzen 9 3900x, 32GB RAM) at 1440p resolution and Ultra graphics settings, I had good performance, even with advanced aircraft and full AI traffic simulation, only getting around 10 FPS compared to the default scenery got very impressive and frankly unexpected.

Night lighting is well done throughout, both inside and outside the terminals, with well-lit aprons, taxiways and runways.

Responding to the weather is a bit more spotty. Snow coverage isn’t terrible, but it’s not perfect either, with some of the usual patchwork that unfortunately seems to be mostly caused by limitations in Microsoft Flight Simulator for now. It’s snowing inside too, which is always a bit amusing to see.

While most textures respond well to rain, there are areas of the floor that don’t get wet at all. These are fairly small and are concentrated where the taxiways intersect the road and railway underpasses, but they can be a bit distracting.

But these small flaws are basically negligible when considering the overall quality of this airport in almost every aspect.

It’s another fantastic work from WF Scenery Studio that once again proved it can create some of the best airports for Microsoft Flight Simulator.

If you enjoy flying in China, Beijing Capital Airport, like pretty much every other scenery addon released by this particular developer, is a very easy recommendation. 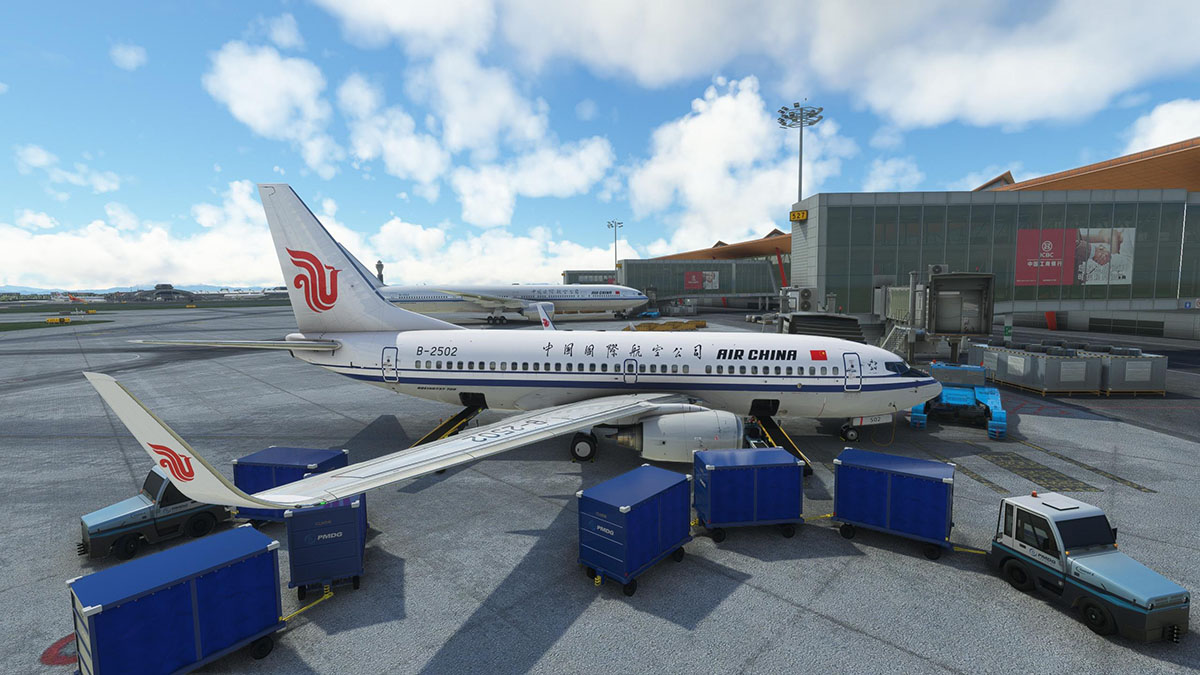