As a major North American hub for both passenger and cargo air travel, Anchorage was a much-anticipated addition to the simulator program, and given that the release was a little out of left field, it was definitely a welcome surprise.

A pretty big plus is that it’s packed with the Lake Hood Seaplane Base (PALH), which also has a gravel strip, so you’re well secured even if you plan to explore Alaska in small GAs and seaplanes.

By the way, considering Alaska Airlines is a major 737-700 operator, this is also a great airport if you enjoy flying the latest version of PMDG. Additionally, it’s perfectly compatible with Orbx’s Alaska Mesh, in case you’re wondering.

It is currently available on Aerosoft’s own shop for $28.05 including sales tax and uses the developer’s handy Aerosoft One client for convenient installation and updates.

If you want a comprehensive look at the landscape, you can watch an ILS approach and landing on runway 15 in the first video above and a full flyover in different light and weather conditions in the second video below.

Keep in mind that the planes you see in the videos aren’t part of the scenery (they’re from a couple of third-party AI solutions I use) since Anchorage Airport doesn’t have any static planes apart from a couple of DC-3s Has. and a display DC-6 and 737-290C. The seaplanes and general aviation aircraft around Lake Hood are included instead to liven up that part of the scenery, which is a balanced choice.

Speaking of AI planes, although the airport is well set up to allow for their smooth operation, for some reason the folks at Sim-Wings forgot to include ramps large enough to accommodate 747s and 777s, resulting in that these guys never appear on departure and disappear on landing if you have a 3rd party AI solution that includes them.

This is a pretty sizeable issue considering Anchorage is an extremely important cargo hub and receives a lot of 747 traffic. It usually hosts so many that they even flock onto the main apron in front of the terminals. In the past I’ve been lenient on this because advanced AI solutions for Microsoft Flight Simulator were young, but it’s high time scenery developers started doing sufficient testing with them before releasing their airports.

All published instrumental approaches work well and the PAPI lights are well calibrated and provide the right guidance when working visually.

All taxiways and ramps are also correctly labeled and the ground services are fully available and functional, which means that the airport is well done from a usability point of view, in addition to the AI.

The orthophoto used as the base of the scenery is detailed enough and I really appreciate the fact that the developers went to the trouble of cleaning up the plethora of seaplanes and small planes that are likely to be present on the ground in order to to replace them with static 3D airplanes. You see a lot of Microsoft Flight Simulator developers leaving them “painted” on the floor, just slapping the 3D models on top of it, and that’s very sloppy. It’s great that Sim-Wings has gone a step further here, even if it must have been a lot of extra work.

Runway and taxiway texturing is generally well done, with fairly realistic finishes, wear and weathering. The patchwork of materials due to paving and repairs seems somewhat simplified compared to photographic sources I could find, but not by much. All painted elements (lines and numbers) are clear but not cartoonish and as expected correspond to their real life counterpart.

The slope of the runway is well simulated and the signs are custom made and quite pretty, including the little flags to make them more visible in the snow.

The terminal buildings are beautiful, with good 3D modelling, a high level of detail and a competent use of PBR. Maybe they look a little on the clean side, but to be fair that also matches the real-world counterpart from the photographic sources I was able to find.

Sim-Wings did a wonderful job recreating one of the best terminal interiors I’ve seen to date. It doesn’t use many polygons, but it captures the atmosphere of the airport very well: its shops, check-in areas, gates, artwork, memorabilia, and the aircraft on display. It’s clear proof that you can create great terminal interiors that enhance an airport’s atmosphere and character without sacrificing performance.

High quality passenger models have also been added and while there aren’t many of them and they aren’t animated, they do a good job of complementing the environment and making it look alive.

The custom jetways are also nice, well modeled and detailed, the only minor flaw being the static auxiliary access stairs so they can float a bit or sink into the tarmac depending on your position. Then again, they have their own built-in lighting, which is a treat.

The hangars and outbuildings near the main aprons are quite good, and so is the landside area (I particularly love the iconic train with its diesels at the station, albeit not animated), but it gets a bit more difficult once you get your head around away from the most traveled areas, with simplified models and some low-resolution textures.

The Alaska Aviation Museum is particularly disappointing as it only includes the previously mentioned 737-290C but is missing many of the highly visible attractions such as the F-15 and many more. I understand wanting to optimize performance, but this is an iconic part of the airport and I feel a little more detail would have been warranted.

Another area that could have used more work (resp any work) is the sewage treatment plant located west of the threshold of runway 15. Almost no work was done here, so the tanks were simply painted on the ground and all the buildings were created using standard autogen models (one of which is even automatically placed on top of one of the tanks). Not only is this the largest facility of its kind in Alaska, but it’s also so close to an airstrip that its neglect really cannot be excused.

On the other hand, I appreciated the amount and density of utility vehicles (including the correct liveries and markings) and ground clutter on the aprons, making them feel realistic and lived-in.

As far as performance is concerned, the developer did a great job optimizing the airport: despite the massive difference in detail between the default version of the scenery and the add-on, I lose on my PC (RTX 3070, Ryzen 9 3900x, 32 GB RAM) at 1440p resolution and Ultra graphics settings.

Night lighting is generally well done across the board, both airside and landside. The aforementioned jetway lighting is a highlight, but I noticed a small flaw that seems to be common in sim-wings Microsoft Flight Simulator scenery: the textures of some buildings appear to be fully lit at night, including the walls, rather than confining light to windows and other realistic sources. That’s a bit irritating.

The airport responds well to most weather conditions, with textures that look good when wet, and even fairly competent snow coverage, which is still very rare in Microsoft Flight Simulator due to the way Asobo has implemented snow. While it’s not perfect, the flaws are likely beyond Sim-Wings’ control, and the fact that it’s at least “good enough” is definitely important in a place like Anchorage.

Ultimately, Sim-Wings’ Anchorage Airport is definitely a well-made scenery pack that offers a huge improvement over the default scenery. There are a few areas that could use a little more love, but they’re not crippling.

Microsoft Flight Simulator really needed a good rendition of Anchorage, and this one delivers exactly that, so it’s easy to recommend if you enjoy flying in Alaska, which really is a beautiful region to explore, or if you’re interested in cargo operations. 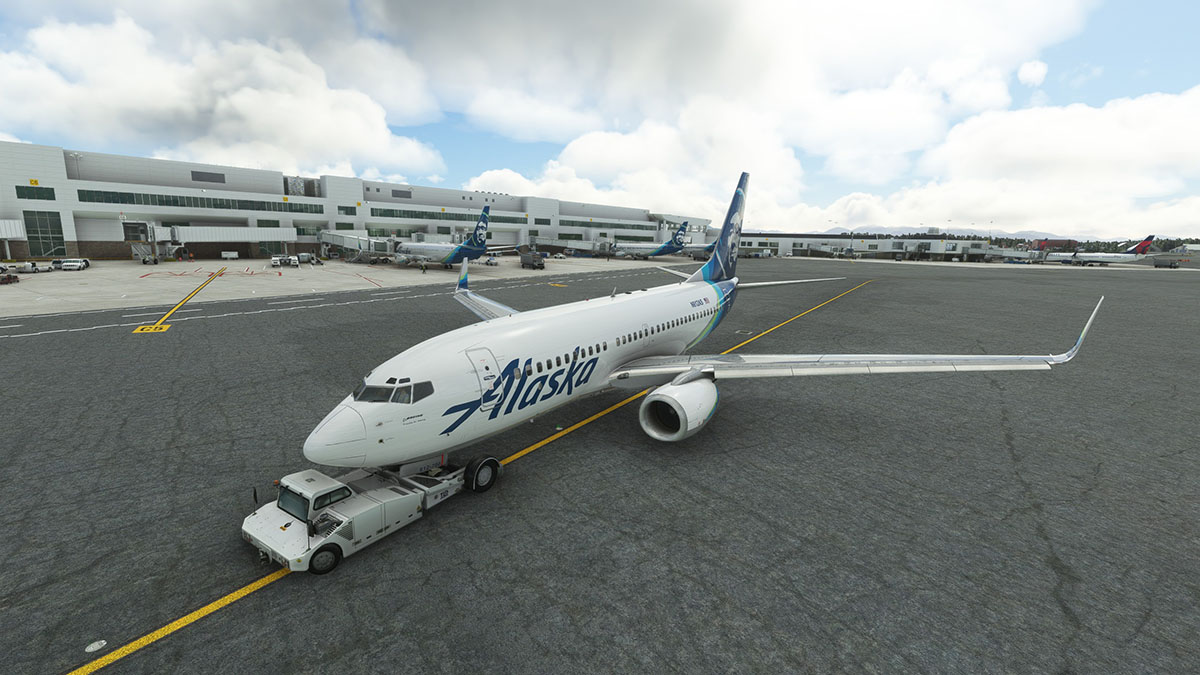