It’s hard to believe, but it’s been two years since the PlayStation 5 launched and heralded the start of a new generation of consoles. The console launch was bumpy to say the least as many gamers couldn’t and still can’t make the next step in PlayStation gaming. Combine that with the small selection of launch titles due to forces beyond our control and many players were scratching their heads wondering if this was the real beginning of next-gen gaming.

Aside from a limited selection of launch titles, one game stood out from the crowd. Besides Demon’s Souls of course. That game was Marvel’s Spider-Man: Miles Morales and served as the perfect demonstration of the PS5’s power.

Well, this introduction isn’t meant to upset anyone about not missing out on PS5. Instead, I want to celebrate the fact that it’s finally coming to PC, two years after its initial release, and that PC players can take full advantage of the PS5 version while enjoying an excellent sequel. Much like its predecessor, which came to PC in August, Marvel’s Spider-Man: Miles Morales is an excellent PC port and the perfect opportunity to experience a title you might have missed during the PS5 tumult.

Of course, in order to look good, you need to customize the game to your settings. This game offers an impressive amount of customization such as: B. different aspect ratios, graphical settings to play around with and much more. The sequel also launches an options menu before you begin, so you can play around with settings beforehand that might seem small but are greatly appreciated. While other titles require you to open the game and restart after configuring the settings, this game lets you do it from the start.

Full disclaimer, I picked up Miles Morales on PS5 launch day. I thought the game looked great at launch despite having to choose between 60fps or ray tracing. With the PC connection you have everything ready to go, which makes me a little jealous. In hindsight, after going through the usual checklist of toggle settings, I’ve come to the conclusion that Miles Morales runs buttery smooth and that it looks even better on PC than it did on my PS5.

Well, I know that last sentence might sound crazy, but it’s certainly true. For reference I have a 2070 Super and am playing Miles Morales on PS5 to date so there is no recency bias. Ray tracing is enabled by default, with no compromises like my first time, and the game looks amazing.

From the exquisite lighting of Miles’ super-powered Venom abilities to the wonderfully bright and powerful technology of the street-savvy villains Underground, this is an amazingly beautiful game. I’m a fan of good lighting, and this game is full of bright lights enhanced by the power of ray tracing. There’s an in-game photo mode to capture those moments, and my hard drive is full of random shots that showcase the game’s technical prowess.

While the game looks good, it also helps ensure that the framerate is smooth and consistent, as it hit a solid 60+ FPS during combat, in and out of cutscenes, and while swinging through the wintry streets of New York. After playing through what I thought was pristine frame rate play on PS5, these new levels were incredible and mind-blowing.

Apart from that, this game also plays well on PC. I tend to stray from using a mouse and keyboard in games like this, as too many keys mean a higher chance of messing up at key moments. However, the controls are easy enough to use, and it felt good to do everything a spider can do. If you happen to have a PS5 controller, this game happens to support DualSense, with the haptic feedback being transmitted. It sounds insignificant, but it’s a nice little feature as you can feel the “push and pull” of swinging through New York in the triggers.

Miles is the aspiring Spider-Man, so while he doesn’t have the technology that Peter Parker does, he does have bioelectric abilities called “Venom” abilities, which are shocking and fun. As you progress through the game, many more will be unlocked to keep you busy with a skill tree and challenges to boost your skills upon completion. By the end of the credits, Miles’ version of the wall-crawler is very powerful, with his unique abilities helping him carve his own path in the light of crime-fighting and dual identities.

One of my little issues with the first game was that sometimes Peter Parker felt stiff when swinging around New York City or in combat, he just felt stiff. It’s a hard feeling to explain, but this game completely erases that feeling I was having. For as inexperienced as he is, Miles moves through the streets with ease, whether with his very crude swinging skills (because he’s new) or in the ebb and flow of battle. I don’t take that from the first game, but the newcomer controls and feels better this time.

There’s a good story in this shorter sequel that sees Miles Morales reappear as Spider-Man a year after the events of the first game. Expect the same activities as in the first game, like collecting items from Miles’ past or beating up thugs who harass innocent citizens. It all works well, although there’s no additional content to digest, while the first game had DLC to take over the post-world activities.

If this review was felt to be overly positive, that’s because it’s hard to say anything negative. As mentioned, this continues the fairly stellar path from PlayStation to PC ports that Sony has been focused on. My only issue, and I had the same issue when the game released for PS5, is the price point. In my opinion, Sony’s adaptation of games for the PC should be a little cheaper.

You could argue for both sides as to why that should and shouldn’t be the case, but overall I don’t think charging near-premium for games released years ago isn’t a fair strategy. For reference, the first game’s story lasts about 17 hours, and this game will keep you running for about 8 hours. To be fair there is a $10 difference in price between the two, but this is a much shorter product so the difference feels noticeable.

The Uncharted Legacy of Thieves Collection costs the same price, and you get two games compared to Miles Morales. This time around I think it’s a noticeable hindrance to the final product as I’ve beaten it on PS5 and it’s hard to recommend paying full price to enter the same club you were in, with just the performance huge is selling point. Especially if you’ve played through it before on the PS5.

Price point aside, Marvel’s Spider-Man: Miles Morales is a technical spectacle on PC, with frame rates going to the moon or for being one of the best looking games I’ve played on the platform. While the price is a negotiable evil, the final product is a masterpiece, especially given the PC port of the first game that came out a few months ago. If you haven’t already, I highly recommend catching Miles Morales in his first major performance. 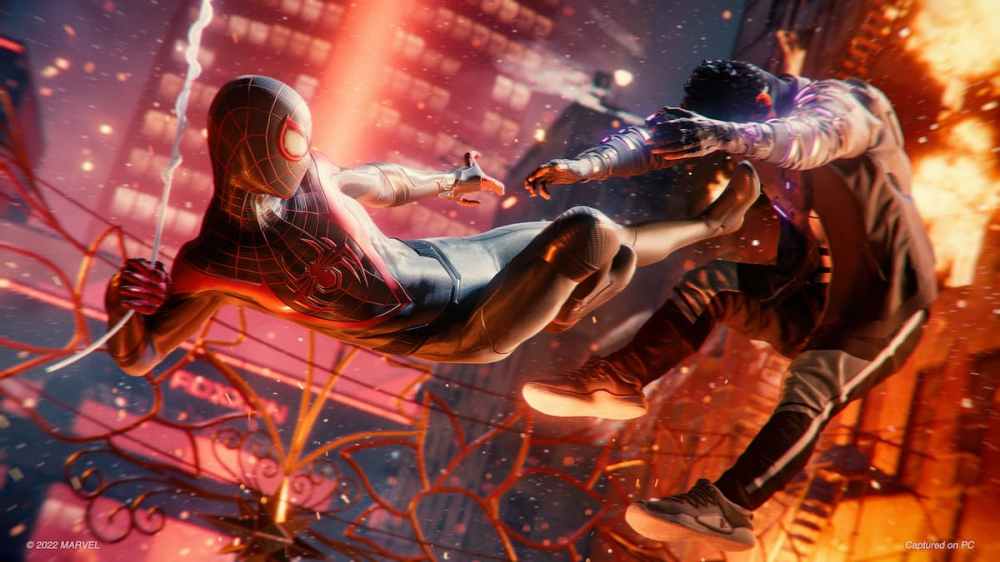