It takes a lot – and I mean it a lot of– so I get properly invested in a mobile game. I may be completely degenerate when it comes to gacha games and any kind of RNG based pulling system, but it’s rare that I get to the point where I even consider spending money on a game.

The gacha games that attract me are usually already associated with an established IP, like War of the Visions with Final Fantasy or NieR Reincarnation with, well, NieR. There are exceptions like Genshin Impact and the upcoming Honkai: Star Rail, but these games are pretty big exceptions as they are the outliers that are quite obviously miles ahead of the rest of the competition. When Dislyte came along, I was pleasantly surprised to see that I’d finally found an original IP gacha game that I could really invest my time in.

First impressions count the most when it comes to mobile games, especially when they are free to play. If something doesn’t grab you within the first 15 minutes, just uninstall the game and move on to the next. Dislyte understands this on a very basic level, which is why the first thing you’ll notice about this game is its distinct comic book-like art style and eye-catching animations.

Last but not least, Dislyte scores top marks for the presentation. The synth music is catchy as hell, the combat animations are smooth and fast, the urban city-style menus are so pretty to look at, and the character designs are remarkably rich and varied. Really, what I like most about this game is how body-hugging the character designs are – something you don’t see in most of your gacha games. It feels like Lilith Games really took the time to ensure the roster is as diverse as possible and able to deliver as much representation as possible.

Even the summoning animations are top notch. If you drag 10 times you’ll get an awesome looking animation where all the characters will fade in and out when a spotlight falls on them and they’ll dance a little or pose to introduce themselves. It’s just so incredibly aromatic; These characters have a lot of personality, which makes pulling a new character very exciting.

Speaking of characters, I guess I should talk a little bit about what Dislyte is actually about. The game is billed as an urban mythological fantasy RPG in which all characters are based on gods from different cultures and mythologies. You have Sun Wukong, Nezha, Hades, Thor, Anubis, and Osiris to name a few.

They’re all portrayed as hip, attractive young adults out of combat, and the game’s trendy streetwear vibe alone reminded me a lot of Splatoon. In fact, the best way I could describe the aesthetic of this game is that it feels like a fantastic cross between Splatoon and Hades. Handsome gods partying and listening to music and keeping up with the latest fashions? yes sign me up

Dislyte also shines in the combat department, where you fight enemies in a turn-based affair. Each character has three abilities, and some of their more powerful abilities have mid-turn cooldowns. With that in mind, it’s imperative that you think carefully about when to use these powerful abilities and when to save them for a crucial turn.

The way the turn order is established is where things get interesting. Dislyte’s combat focuses heavily on speed, and the faster a character is, the sooner their turn can come. You can also manipulate turn order by equipping a character with relics that increase their speed and using characters with skills that absorb AP (action points) from their enemies to slow them down.

Combat quickly turns into a fun dance of increasing your own party’s speed as much as possible while slowing down your enemies as much as possible to prevent them from even being able to make a turn. It gets immensely satisfying when you finally find a team composition that lets you do just that, and the most fun part is building a team and raising it to the point where you don’t even have to lift a finger when you turn on Auto – fight and let them do their thing.

There are also plenty of things to grind for, including relics, which you get from Ritual Miracle levels, and waves, which are used to level up your characters and are farmed from Sonic Miracles. There’s also a tower mode that gets progressively more difficult as you climb it, but the rewards are definitely worth it as you can get a powerful legendary character for clearing floor 100.

Content-wise, Dislyte is doing pretty well so far, although it definitely needs endgame content sooner rather than later. For now, the relic farm is all there is. Endgame content consists mostly of collecting relics in hopes of getting the ultimate perfect relic with optimal substats for each character, and that’s not the kind of grind I find very interesting at all.

As much as I would continue to praise Dislyte, it must be acknowledged that for a modern gacha game this game also has some serious flaws.

Let’s address the elephant in the room: the Legendary and Epic rates are pretty abysmal, and the Shimmer element only makes it worse. Each character in the game is associated with an element: Inferno, Wind, Flow, and Shimmer. The first three follow a rock-paper-scissors system, where they are strong against one element but weak against another. Shimmering characters, on the other hand, have no strengths or weaknesses. They deal and receive flat damage percentages from all enemy types.

Dislyte’s rates are 9% for an epic drop and 1% for a legendary drop, and they are even lower than those for the legendary and epic glimmers. The game has a fairly generous pity system where you’re guaranteed to draw a Legendary every 120 turns. Dislyte also differs from most other gacha games in that it’s actually possible to get Gold Record drops from regular farming stages, which allow you to do a single move. You don’t see that in many gachas.

The downside, however, is that Dislyte can feel incredibly stingy in virtually every other aspect of the game. The stamina system is extremely restrictive, only allowing players to farm levels for about an hour each day unless they want to spend some of their precious premium currency to top up their stamina. This problem is exacerbated by the fact that many of the late-game grinding stages cost massive amounts of stamina.

And then we have the event banner. At the time of writing, Dislyte’s first official event has gone live, introducing a new legendary character, Ollie. As part of the event, Ollie’s drop rate has been increased. So while you have a 1% chance of getting the regular Pool Legendaries if you hit Pity, Ollie has a 10% chance of dropping. That’s okay, but not exactly a great value either.

And then there’s the event banner pity system, which feels like a slap in the face for F2P players. The usual 120-move pity still applies here, but your chances of getting an ollie don’t increase until you hit 350 moves. After 350 turns, when you draw a Legendary, Ollie’s drop rate increases by 10% every 50 turns. This means that in order to guarantee ollie, you need to get over 900 moves.

For reference, in most modern gacha games, you can grab the featured character after about 200 moves. War of the Visions and NieR Reincarnation do, and games like Alchemy Stars, Counter:Side, and Arknights have even slightly more generous pity systems than those two games. Granted, these games prioritize duplicates as they can really unlock your character’s potential, so I understand the decision to make it a little harder to pull Legendaries into Dislyte. But still, 900 moves is pretty crazy.

To be blunt, it is extremely unlikely that you would need to make 900 moves to get an ollie. For most people, the odds are pretty good that you’ll get lucky and catch him way before that, but there’s always a chance you’ll be massively unlucky, even if Ollie has a 90% chance of falling and going all the way must just feels bad. To put things into perspective, if you plan to spend money buying Gold Records, it costs around $100 for 40 puffs. You’re potentially looking at over $2,000 just for getting Ollie if you go all the way.

Full disclosure here: Lilith Games was kind enough to send me some resources for this review, including 100 Gold Discs and 20,000 Nexus Crystals, which equals another 100 Gold Discs for a total of 200 draws. That’s not even a quarter of the way too bad, and smashing all those records on that banner just seemed like a total waste.

By the way, I ended up making those 200 moves and getting three Legendaries: Donar and two copies of Sun Wukong. I should mention that pulling duplicate legendaries in this game also feels pretty bad, since dupes aren’t quite as important in Dislyte as they are in most other gacha games. Dupes can be fused together to give you some extra stat points, but this boost won’t make much of a difference unless you’re in the tippy top PvP tiers where all your relics are perfectly tweaked.

I’m someone who usually likes to spend a little money on my gacha games, and I’ve seriously considered buying the monthly pass, which gives you a few hundred Nexus Crystals for daily logins. However, after looking at the event banner, it’s clear that Lilith Games needs to do something about their rate-up characters and take a second look at the pity system. Until prices get a bit more F2P friendly I’ll probably stay F2P and keep the wallet closed.

Gacha players are more likely to spend money on a game when they feel they are getting a lot of value for their money. As it stands, Dislyte’s plans and offers are just a bridge too far for most people. It’s such a shame because the potential of Dislyte is huge, and as someone who genuinely enjoys playing it, it would be crushing if the game died due to its unfriendly F2P choices that ended up chasing away the majority of its player base .

At the end of the day, I would still recommend Dislyte to anyone looking for a truly unique gacha game with eye-catching character designs and a cool aesthetic. The team building aspect is on point, and the overall atmosphere of the game just oozes charm and style. Just keep your wallets closed until we see some tangible improvement in those pull rates. 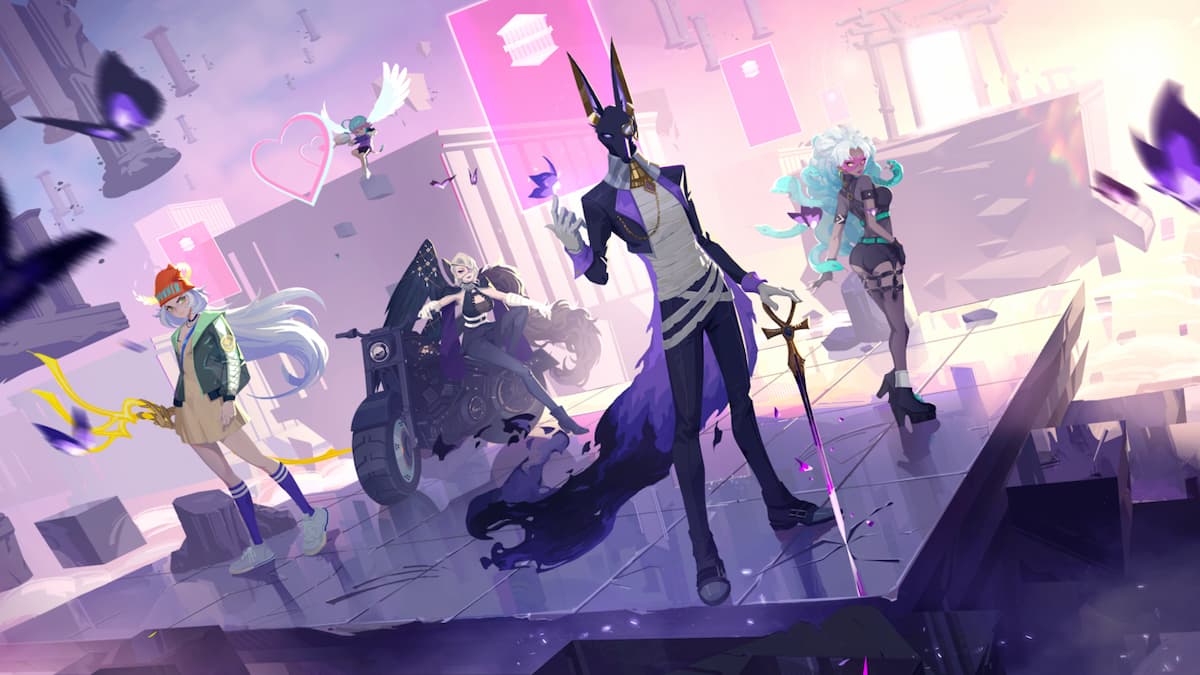